White House Doctor: Trump's Mind Is Sound - His Body Is The Real Problem

Since the publication of Michael Wolff's tell-all book, "The Fire And Fury," people have been questioning Donald's mental health.

Wolff cited a number of Trump officials who suggested that the President is losing his marbles and is not cognitively fit to run the office. But, this week, Trump's doctor has shut down any rumors of the President's inability to do the job.

"I have no concerns about his cognitive ability," Dr. Ronny Jackson told reporters during a White House press conference.

Dr. Jackson noted that the cognitive exam was not required or even necessary to complete Trump's normal physical. However, the President demanded that he complete the exam in order to combat Wolff's suggestions that have been plaguing the West Wing lately.

Trump received massive amounts of criticism following his election exam which was conducted by the cooky Doctor Harold Bornstein. But, this time around the press cannot attack the credibility of Trump's doctor. 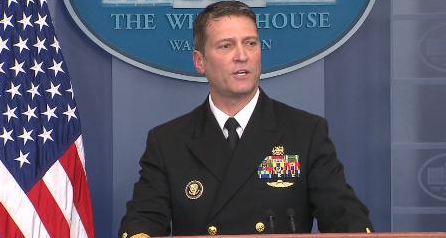 Dr. Ronny Jackson formerly served as a White House physician during the Obama administration. Jackson has been active in medicine since joining the Navy in 1995 and his reputation is outstanding. HIs allegiance is to America alone, not the left or right. So, it wasn't a surprise when he was fully honest about both Trump's mental and physical state. Although Donald is mentally fit, Jackson did reveal that his body needs some work.

It's no secret that Trump is much older than previous Presidents and he certainly has a different diet than Obama. He's a fan of fatty foods and no one can really blame the guy. Jackson said that the President, "would benefit from a diet that is lower in fat and carbohydrates." In fact, Trump now has a goal to lose 10-15 pounds.