The White House has been warned - NO ONE messes with Ivanka Trump! A new tell-all book has revealed that Donald's Former Chief Strategist went head to head with the First Daughter and lost. 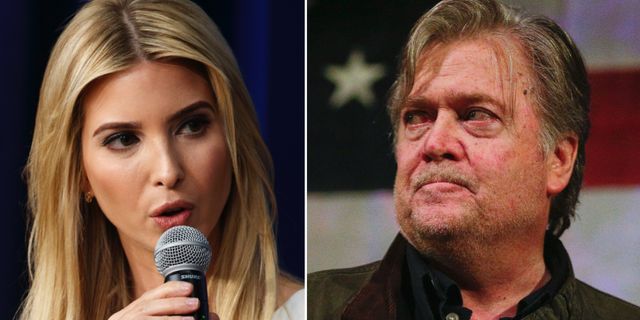 “You walk around this place and act like you’re in charge, and you’re not. You’re on staff!” Bannon continued.

Ivanka didn't respond very well to the attack; and who can blame her? CNN claims that the First Daughter stepped up to Bannon and hit back yelling, "I'm not a staffer! "I'll never be a staffer. I'm the first daughter and I'm never going to be a staffer!"

This CNN quote is one that we hope is true. At the time of the argument, Ivanka held the informal title of Assistant to the President of the United States. Sure, she wasn't sitting with the cabinet and she didn't have access to the nuclear codes. But, the Ivanka's response to Bannon is justified.

Every administration allows family members to have a heavy amount of influence without holding a specialized title. After all, they know the President best and their opinion should matter. You can guarantee that no one in the Obama administration was yelling at Michelle claiming that she's just the First Lady.

Clearly, Bannon lost the argument. Ivanka is still involved in the White House while Steve sits alone after being fired. He's resorted to bashing the Trump administration from the sidelines instead of trying to take it over from the inside. Donald Trump has since stated that Bannon has "lost his mind." Steve is also one of the many former Trump staffers who is being investigated by Mueller.