Yes, Donald Trump is balding and he has a silly haircut to cover it up - get over it America!

The media is buzzing after a video of Donald Trump on a windy tarmac went viral. President Trump was heading up the stairs to Air Force One when a gust of wind blew the back of his hair up to reveal a pretty patchy bald spot. 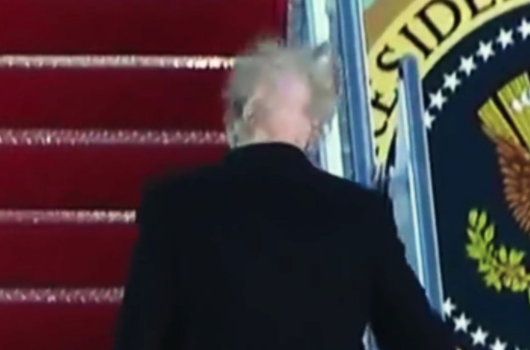 Questions about the nature of Trump's hair have haunted him long before he ran for President and won. People have wondered about his golden locks since he became the golden boy of NYC way back in the 1980s.

Is it a wig? Did he receive hair plugs? Or, is it all real and just a bad combover. Many people close to the President have come out and spoken about American's favorite question and most of them say that the mane is all Trump.

Donald even let Late Night host Jimmy Fallon rub his head on live tv in order to shut down rumors that it's a wig. The President claims that it's all about how he dries it. He apparently washes it with head & Shoulders and lets it air dry for about an hour.

One Apprentice stylists told Gawker that the hair is 100% real but it is held down with a lot of product. The President's hair managed to make Michael Wolff's tell-all book The Fire and Fury with a quote from Ivanka Trump. According to Wolff, Ivanka once said that her father's hair is a result of a scalp reduction surgery back in the 1980s.

"[Ivanka] An absolutely clean pate—a contained island after scalp-reduction ­surgery—surrounded by a furry circle of hair around the sides and front, from which all ends are drawn up to meet in the center and then swept back and secured by a stiffening spray."

Enough is enough. We have plenty of evidence that shows that Mr. Trump's hair is in fact real. At the end of the day, who cares? As long as he does his job then his hair shouldn't matter. The man is 71-years-old, let him rock whatever look he wants!