The Second Amendment has been compromised for the GOP National Convention and more than 45,000 citizens are fighting for change.

A petition has been circling the country asking for the Quicken Loans Area in Ohio to allow guns into the convention thereby forfeiting its strict policy against guns.

The petition’s author is unknown, but he or she has asked all three republican candidates to support the cause. Ohio is an open carry state, however, it does allow establishments to be “gun-free zones.” The petition asks Ohio Governor and candidate John Kasich to use his executive power to override the policy. 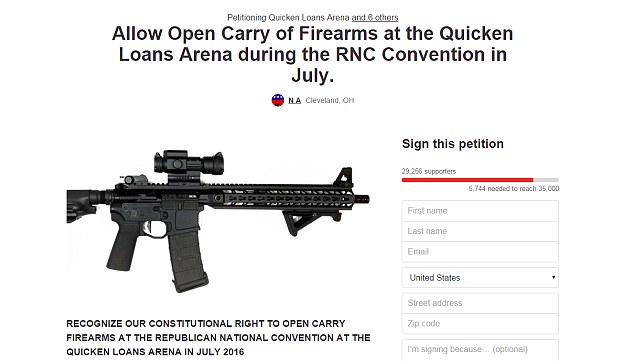 The state is using a $50 million federal security grant to prepare police with riot gear. Nonetheless, the security does not settle the nerves of attendees who are aware of the countless terrorist attacks and mass shootings that have occurred in recent years.

If you feel that the policy should be overridden, then please leave a comment to help inform the nation about our Second Amendment rights.