President Trump Says Melania Could Be The 'Next To Leave'

Yes, President Trump made a divorce joke. But, was the joke really that big of a deal?

Donald Trump is owning the fact that his administration is continually changing up the staff. In Trump's White House, if you don't fit, then you're out! His high turnover rate isn't a problem for Trump or his fans, but recently he fed into some liberal bashing by joking that his wife Melania could be the "next to leave."

“So many people have been leaving the White House, It’s actually been really exciting and invigorating cause you want new thought. So I like turnover. I like chaos. It really is good. Now the question everyone keeps asking is, ‘Who is going to be the next to leave? Steve Miller or Melania?'" Trump joked. 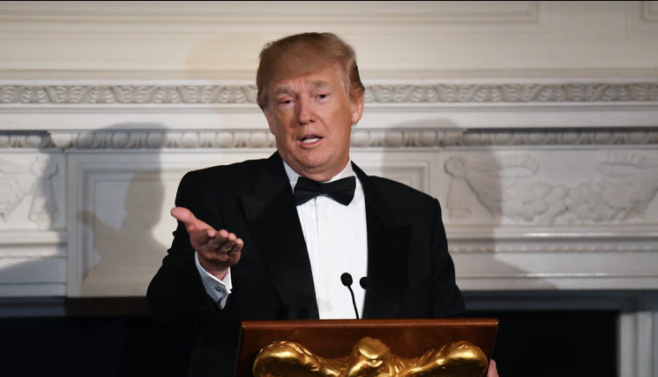 The President made the comment during the Gridiron dinner which resembles the yearly White House Correspondents dinner. Hundreds of journalists attend the dinner and the night's tone is set by political jokes and harmless banter.

Donald backtracked the comment by adding that Melania is “actually having a great time” in Washington. Still, his comment is being blown out of proportion by every media outlet in the nation. Obama used to make jokes. Why can't Donald do the same?

The President also joked about his son-in-law Jared Kushner's recent issues with his security clearance saying Jared was late because he "couldn’t get through security.” It's no secret that Donald watches loads of TV so he's certainly aware that the media continually sparks rumors saying Melania is leaving him and Jared was the ringleader in the Russian hack.

America needs to finally realize that Trump isn't the traditional politician that the nation is used to seeing. In fact, the President has never likened himself to being a politician at all! He campaigned on his honesty and outspoken personality. Sometimes he may make a comment or two that stirs some controversy on the left. But, as long as he keeps the nation running, most Americans are going to brush off the jokes and keep living their lives.