Oregon congressional candidate Mark Roberts picked a fight with the wrong lady this week. The self-proclaimed "independent conservative" called FLOTUS a "hoebag" on Twitter, which caused an incredible uproar from Melania fans who want to take Roberts down - and for good reason!

Roberts suggested Melania was a prostitute while responding to a tweet sent by Charlie Kirk; who founded the conservative group Turning Point USA.

Kirk tweeted out that Melania has just five staffers on her payroll, while Michelle Obama had a massive team of 44. Instead of congratulating FLOTUS for cutting costs like a true conservative, Roberts decided to continue the bashing with the childish accusation that many are calling "disgusting." 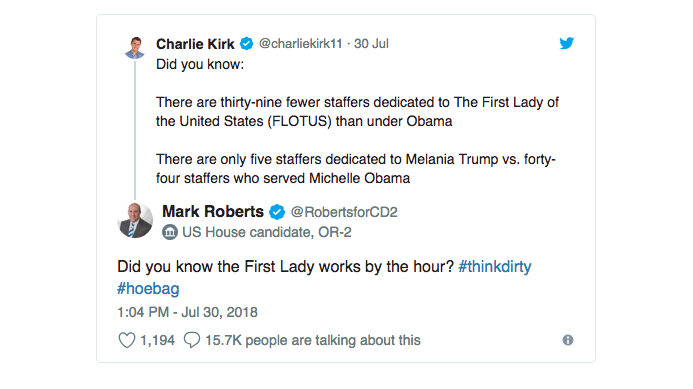 "Did you know the First Lady works by the hour? #thinkdirty #hoebag," Roberts said in response.

That's right, he called the First Lady of the United States a hoebag. And, even worse, he tried to make the insult trend on Twitter by adding the hashtag! Melania's spokeswoman Stephanie Grisham shot back at Roberts saying, “To say such ugly words about a mother, wife, and our First Lady is not just a pathetic attempt at getting himself in the news; it is disturbing and despicable.”

Grisham also pointed out that the insult was just another pathetic Trump jab from another attention seeking politician. Fortunately, Grisham wasn't the only one standing up for Melania. House Majority leader Kevin McCarthy has called for Roberts Twitter account to be banned. Republican National Committee chair Ronna Romney McDaniel called the tweet "disgusting" and has asked that Oregon voters "condemn this candidate and his candidacy.”

Melania has not responded to the tweet herself. Hopefully, FLOTUS has learned to brush off such trivial insults from such trivial people. Sadly, she's had to endure a lot of these attacks since Ted Cruz started the Melania Trump hate club back in 2015. It's time for these Trump haters to just grow up. If they have a problem with Donald, then they should take it up with him. Leave Melania alone!