Melania Trump is strutting her stuff these days. FLOTUS stepped out in a power suit this week to accompany Donald to Ohio and the cameras seemed to flash just for her!

Sure, the power suit has been tried by every First Lady before her. But, Hillary's hilariously colorful pantsuits and Barbra Bush's conservative skirts are tragedies when compared Melania's taste. 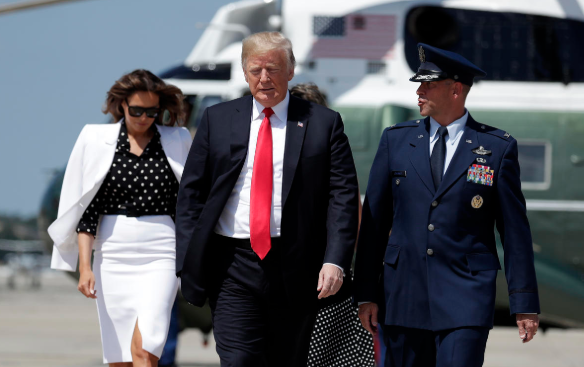 The First Lady wore a white skirt with a matching Michael Kors jacket draped over a black blouse with white polka dots. Of course, she topped off the outfit with her signature shoes - stilettos! Melania has certainly had dozens of styles that stood out over the summer. Though, out of all of her outfits, this one may be the best and it comes at the right time.

President Trump has had a rough couple weeks. The media is attacking him following Paul Manaforts conviction and they're criticizing his response to the death of Senator John McCain. Plus, it doesn't help that he was spotted drawing blue stripes on the American flag at a children's hospital - not his best week.

Still, Trump fans have no need to worry. Like always, Melania jumped to the rescue to boost Donald's image a bit. There's no denying that she's a strong bridge between anti-Trumpers and POTUS lovers. Her popular "Be Best" campaign to combat bullying and opioid addiction was jus the thing to halt the media's witch-hunts and focus on something that matters. The First Couple took some time to promote the campaign while in Ohio stopping at a neonatal unit of the hospital, which helps treat babies who are born addicted to opioids.

We've noticed from the past that Melania seems to attract the cameras right when the media is overpowering Donald. When things are good, she steps back and keeps the outfits subtle. Dark blues and greens are for quiet days. This month, FLOTUS has rocked bright yellow, hot pink, a lace sheer, and now this sleek white. If she keeps out-shinning Donald, at this rate, she'll be sitting behind the resolute desk in no time.