Melania Trump is winning over Democrats! That's right, a new poll by CNN has the First Lady earning some love from both the left and right. 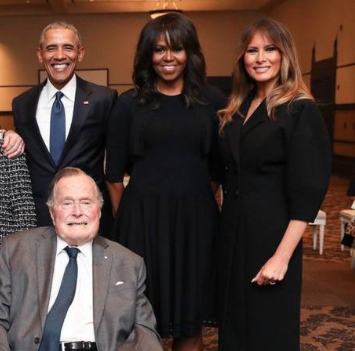 The poll found that Mrs. Trump has an impressive approval of 57% up ten percentage points from January. FLOTUS saw the largest bump come from women who have loved her increasing presence over the last few months.

Of course, Melania's increase in public appearances has come during a rough time for the First Lady. She's had to keep her head up high while battling with the negative press over her husband's alleged affair and contract with adult film star Stormy Daniels.

Some believe that the affair boosted her approval rating because of the endless amount of empathy coming from women who respect her handling of the situation. Her impressive efforts during the official state dinner with the French delegation also made headlines. Melania reportedly took control over the major event by orchestrating every aspect of the dinner including the centerpieces, seating, and menu.

It may have taken a few months, but it seems like the First Lady has found her footing in the White House. Unlike other recent First Ladies, Melania had little experience in politics before being launched into the role. Hillary Clinton, Barbara Bush, and Michelle Obama had prepped for their position since before they met their Presidential husbands.

Mrs. Trump, on the other hand, had years of experience on the runway and in the fashion world. Given her background with high-profile events, it's no surprise that Melania has found her place in becoming one of the best hosts to work in the East Wing. This First Lady knows how to impress her guests and it seems like she's just getting started with her legendary planning skills.

Recently, Melania also announced her official campaign to help prevent cyberbullying, opioid addiction, and teen suicide. The First Lady presented her platform in a Rose Garden speech which detailed the "Be Best" campaign. It's likely that her speech could send her ratings even higher. Michelle Obama's highest rating hit 79%, according to a USA Today poll.

Could we see Melania surpass Michelle in the next few months?