The White House has revealed that First Lady Melania Trump was trapped for a time in her Hamburg residence because of protests at the G20 Summit.

Violent protesters have taken over the streets of the German city to rebel against the many world leaders gathering for their annual meeting. Stephanie Grisham, Melania Trump's spokesperson, told the press that the situation was "unfortunate" when the police could not clear FLOTUS from the building. 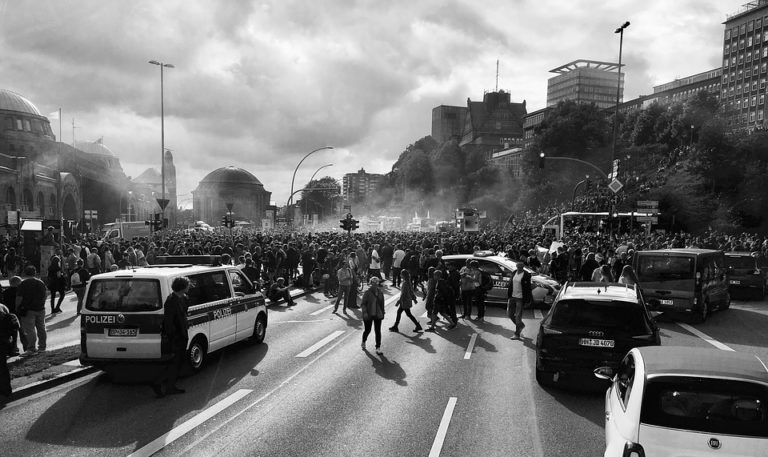 So far, the LA Times has reported that nearly 100 Hamburg police officers have been injured from protestors throwing rocks and 50 arrests have been made. The city responded by launching tactical teams equipped with water cannons to disperse the crowds.

Despite the threats coming from the outside, Melania reached out to the world via Twitter saying, “Thinking of those hurt in #Hamburg protests. Hope everyone stay safe! #G20.” Melania eventually broke free from the protests to join her husband at the very first meeting between the Trump team and Russian leader Vladimir Putin.

Melania eventually broke free from the protests to join her husband at the very first meeting between the Trump team and Russian leader Vladimir Putin. Donald and Putin had a two-hour long discussion that was only supposed to be a brief 30-minute exchange. Staffers kept opening the doors to try and sway the world leaders to wrap up their meeting. Rex Tillerson revealed to the press that team Trump decided to send Melania in at one point to break up the talks. However, he admitted that the plan didn't work and the men continued to talk for an additional hour.

Melania and Donald were scheduled to join some of the leaders and their spouses on a boat ride and lunch meeting at a climate control center. However, most of the leaders were also blocked by the protestors including Chinese President Xi Jinping.

The chaotic trip to Germany won't be the last adventure for the Trump's this summer. Slovenian President Borut Pahor has invited the first couple to visit the First Lady's home country. Official dates have not been set just yet. However, it's likely that the White House will accept their invitation. President Trump has only seen his wife's homeland once on a trip before they were married. After he visited, Donald joked during an interview with Larry King that he was there for only "13 minutes" to say hi to Melania's parents.

Share if you're proud of Melania Trump for putting herself in a dangerous situation to represent our nation!