Melania Trump Set Off Alarms After Agreeing With Rumors About Her Illegal U.S. Visa

Ever since Donald entered politics, the nation has berated his wife with rumors surrounding her U.S. citizenship.

Recently, the First Lady's personal twitter account liked a video titled “How Exactly Did Melania Trump Get an "Einstein Visa?" So far, Melania hasn't commented on the tweet and the 'like' has people scratching their heads. 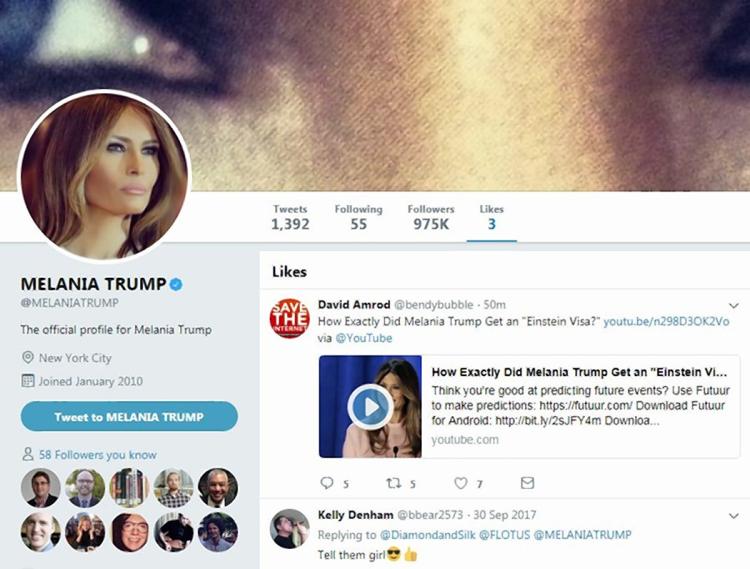 The eight-minute video released from a progressive talk show looked at how FLOTUS obtained the Einstein Visa which is normally meant for people with “national and international acclaim.” Melania liked the tweet late Sunday night and it remained on her account for about an hour and a half.

Melania positioned for the Visa through the EB-1 program and snagged the green card along with 3,376 other immigrants in 2001. According to U.S. documents, nearly 1 million people earned their green card that year.

The visa requires immigrants "to demonstrate extraordinary ability in the sciences, arts, education, business, or athletics through sustained national or international acclaim."

Is it so hard to believe that a celebrity like Melania couldn't join 1 million immigrants? That year, the future Mrs. Trump modeled in the Sports Illustrated Swimsuit edition, modeled for top designers, and became a household name by dating Donald.

Trump's lawyers have released multiple documents proving that the First Lady earned her green card fair and square, yet liberals are still insisting that she's lying. We may never know why Melania liked the video on twitter. Maybe she was trying to show that she wasn't scared of the twitter trolls? Perhaps the First Lady simply liked it by accident? We may never know. But, the one truth that we do know is that Melania is a citizen and twitter trolls can't change that.