For a moment, Melania Trump's controversial 'I Really Don't Care, Do You' jacket was the most talked about fashion choice of the summer.

But, the media blasts have somewhat settled since the First Lady stepped out wearing a conservative pencil skirt and crisp white shirt with her favorite Christian Louboutin stilettos. It's no surprise that FLOTUS decided to take a step back with her look after her Zara jacket stole the attention away from her trip to an immigrant detention center in Texas. 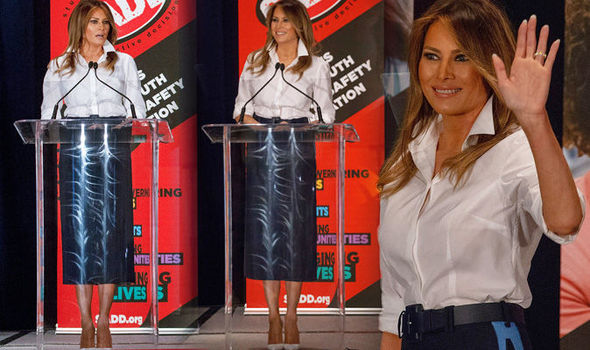 Melania popped her collar while speaking to children and parents at the Students Against Destructive Decisions' conference. FLOTUS hasn't given a direct response regarding her Texas wardrobe. But, the First Lady certainly tried to send a message through her speech at the annual SADD meeting.

"Kindness, compassion, and positivity are very important traits in life. It is far easier to say nothing than it is to speak words of kindness. It is easier to judge quickly than to take time to understand. It is often easier to see a glass-half-empty than half full," she said to a cheering crowd in Tyson's Corner, Virginia. 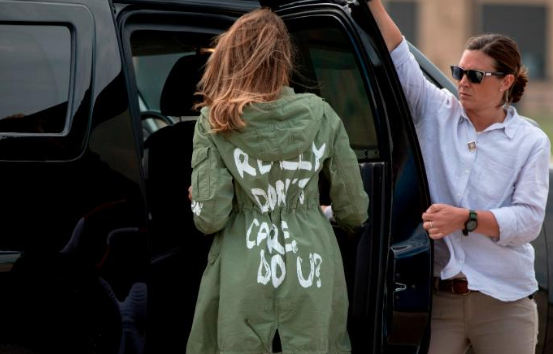 Melania is one of the most judged faces in Washington these days. And, the press never takes the time to understand her or "speak words of kindness." Despite her spokeswoman clarifying that the jacket was just a jacket, the media has pegged Melania as unsympathetic and in support of the immigration centers.

Celebrities jumped on the bash Melania ban wagon. Musicians and actresses like Jenna Ortega took out their frustration through fashion by countering with "I Do Care And U Should Too" jackets.

When Donald was sworn into office, Melania's elegant style was compared to the famed Jackie Kennedy. But, as the media becomes more aggressive towards Trump they can't help but love FLOTUS one day and hate her the next. Prior to this jacket fiasco, the press bashed Melania for wearing a $51,500 Dolce and Gabbana coat. Now, they don't like the message behind her $40 Zara jacket. Can they make up their minds already?

Let us know what you about Melania's conservative pencil skirt. Was her classy look a smart way to settle the gossip?