President Donald Trump and wife Melania were spotted on a dinner date for two at BLT Prime by David Burke. The fancy restaurant is located in the Trump International Hotel which stands just a few blocks from the White House. It's not a bad backup for when the West Wing food isn't catching the President's fancy. 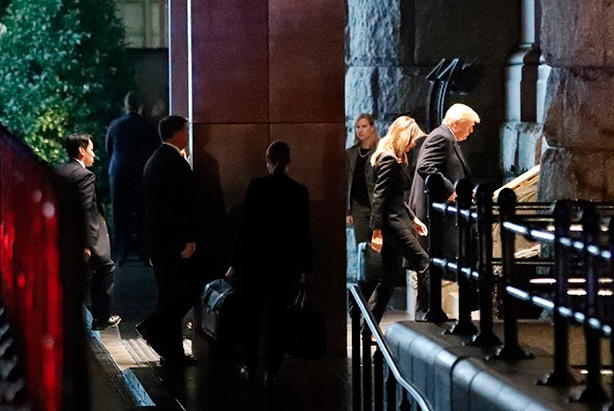 The rare date comes just a few weeks after the first couple was caught up in a sex scandal between the President and adult film star Stormy Daniels.

Guests at the hotel were certainly shocked by the surprise appearance of the President of the United States. Though, Trump isn't really able to surprise anyone nowadays. The First couple entered the restaurant surround by dozens of Secret Service agents. A source for the Washington Post said that other guests needed to go through four intense checkpoints before being allowed to enter the restaurant.

“They looked happy and cozy,” the source told the Post.

Trump and Melania celebrated their 13th wedding anniversary on Jan 22. It's safe to say that with their busy schedule the two weren't able to get too much alone time to enjoy the day. But, a dinner at the hotel you own isn't the worst way to enjoy each other's company.

Rumors have been circling that in 2016 Trump's lawyer paid Michael Cohen paid Stephanie Clifford (Daniels) $130,000 to keep quiet about a steamy night with Donald while he was married to Melania. Since the allegations arose, Daniels has gone back and forth on whether the affair and pay off actually took place. One day she is ready to open up about the event then the next day she's denying it on Jimmy Kimmel.

The inconsistency of her statements shows that maybe Daniels is merely capitalizing on the money given for interviews and the mystery surrounding the actual truth. Regardless of the truth, Democrats are calling for Trump's lawyer to be investigated given that the payoff would have happened during the campaign.