Ivana is the President's first wife and mother of Ivanka, Donald Jr., and Eric Trump. Ivana laughed during the interview and boasted that she texts the President regularly and has his direct line at the White House. "I don't really want to call him there because Melania is there, and I don't want to cause any kind of jealousy or something like that," Ivana clarified. 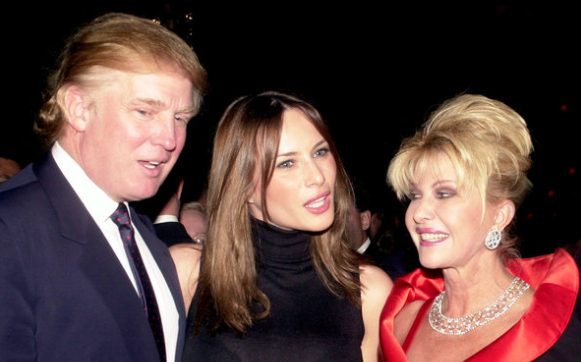 It appears that Melania wasn't too happy with the former Mrs. Trump's comments. FLOTUS isn't the biggest fan of public speaking. However, her spokesperson had this to say, "Mrs. Trump has made the White House a home for Barron and the President. She loves living in Washington, DC and is honored by her role as First Lady of the United States. She plans to use her title and role to help children, not sell books."

Of course, Ivana tried to backtrack her comments during an appearance on Fox and Friends. She even called Melania, "family." She told Fox that she texted Melania earlier in the week to shut down rumors that she was making fun of her accent behind her back.

"I sent Melania the text, that the last thing I would like to do is say something bad about you, you know because you are family. And I don't say anything bad or do anything back to the family member," said Ivana.

Ivana also claimed that she almost worked under the President saying that Donald asked her to be the American Ambassador to her native home, the Czech Republic. “I told (Donald Trump), I said, you know if he would ask me 10, 15 years ago, I would do it. But now I don’t want to be in Prague for four years. So, you know, I’m glad that Melania is there and I’m here.”