Hugh Jackman is known for many things. His voice, his smile, his six-pack abs, and now his friendship with Ivanka Trump and Jared Kushner. 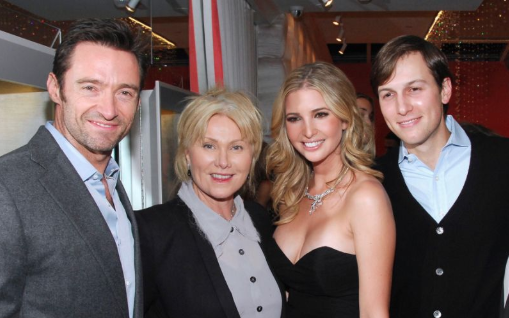 The actor, who rose to fame after playing the X-Men's Wolverine, is out and about promoting his latest film, the Front Runner. It tells the true story of 1987 Democratic presidential nominee Gary Hart whose popular campaign came crashing down after rumors of his extramarital affair hit the press.

Naturally, the films themes have triggered the media to investigate Jackman's political views. The actor is an outspoken liberal who is very much against the Trump presidency. However, this liberal Hollywood actor is buddies with Ivanka and Jared Kushner. And, they've been friends for over a decade! How does that work? Well, Jackman has finally revealed the details.

"We don't talk politics." Yes, that is the best explanation that Jackman had for his long-time friendship with the conservative D.C. couple. When asked about Jared and Ivanka attending his 50th birthday party, Jackman had this to say:

“I’ve known those guys for 15 years, and we don’t talk politics at birthday parties.”

Jackman is one of the few Hollywood faces who has not abandoned his friendship with Ivanka and Jared. Growing up in the NYC elite, both Jared and the First Daughter became pales with dozens of stars including Vogue editor Anna Wintour and actresses Emmy Rossum and Natalie Portman. When the two married in 2008, their guest list was filled liberals who have all disowned the Washington couple. Portman has even said that her old classmate and friend Jared is now “a super villain.”

Fortunately, Jackman hasn't left the Kushner's high and dry following their change in lifestyle. He may not fully support his friends. But, it's nice to see that someone in Hollywood is able to put politics aside and find a way to maintain a positive relationship with the other side.