According to the New York Times, Donald Trump 'erupted with anger' when he discovered that Melania was watching CNN on Air Force One.

The President has one rule in the sky - no CNN! A leaked email says that Donald only allows FOX News to be played on the plane. Of course, it's not a shock that Donald prefers FOX to the 'fake news' of CNN. 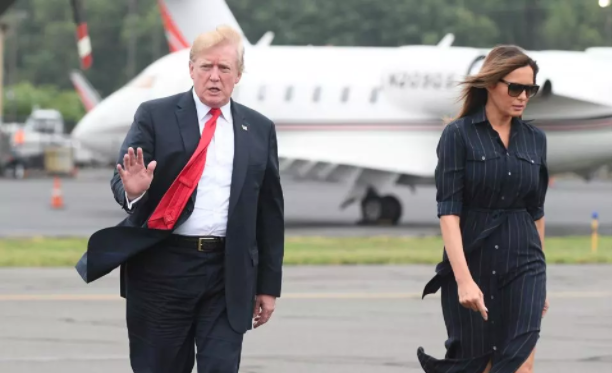 Donald reportedly caused “a bit of a stir” and directed his anger at Melania's staff and not her directly. The internal email was between the White House Military Office and the White House Communications Agency. It referenced the Air Force One incident and noted that in the future every TV must be tuned to FOX, including Melania and Donald's separate hotel TVs.

Melania's spokeswoman, Stephanie Grisham, firmly told the press that the First Lady can watch "any channel she wants." The comment comes at the height of Melania's independent streak. Since recovering from her kidney surgery, FLOTUS has been out and about visiting hospitals and spreading the word about her anti-bullying campaign, "Be Best."

Grisham pivoted the conversation by suggesting what the media should actually be discussing this week.

"Maybe you'd like to talk about the 160,000 kids who skip school every day for fear of being bullied, or that 280,000 students are physically attacked in schools every month,"

"Seems kind of silly to worry about what channel she watches on TV (any channel she wants btw) or if she heard some recording on the news," Stephanie continued.

Should Melania fans take this leaked email seriously? Or, is it just another scam to suggest that Donald and Melania are donzo?