Did Melania Trump Use Christmas Candies To One-Up Michelle Obama?

It's the Holiday season which means it's time for liberals and conservatives to forget their battles over tax-cuts and health care and turn their attention to the endless Christmas war!

Melania Trump has become the queen of Christmas decorations and Obama fans are saying "bah humbug". Her 53 Christmas trees, lights, and holiday goodies have been trending everywhere. But, people are speculating that Mrs. Trump's candy displays are a direct insult to Michelle's health-conscious White House.

FLOTUS has tried to embrace the former First Lady's healthy lifestyle but Donald's love for fast food has left voters worried that he will undo Michelle's efforts. Melania attempted to turn the tide by taking care of Obama's South Lawn vegetable garden. The new First Lady spent the month of September traveling the nation and building healing gardens at children's hospitals saying, "I'm a big believer in healthy eating because it reflects on your mind and your body." 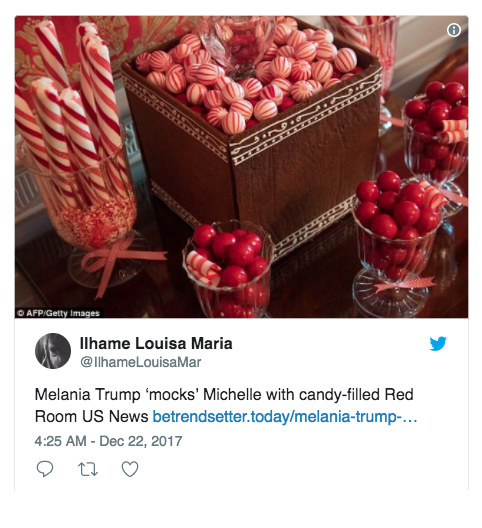 Photos of the Red Room's candy display trended on Twitter with people bashing the Trump family sweet tooth. Still, the real Christmas dig apparently came when the Trump's released their Christmas cards. Unlike the Obama's neutral holiday cards, the Trump's brought Christmas back to the White House with a greeting from Barron Trump that said 'Merry Christmas and a Happy New Year.' In previous years the Obama's were praised by liberals for removing religion from the White House and simply wish Americans a 'joyous holiday season.'