Apparently, Melania Trump Is 'Really Fun' When She's Not Trapped Inside The White House

Melania Trump is trapped in the White House and some of her friends are speaking out about her increased security in 2018.

French First Lady Brigitte Macron and Mrs. Trump have formed a close bond in the short time that Melania has belonged to the First Lady's club. Recently, Macron shared a bit of concern over Melania's restrictions at the White House. 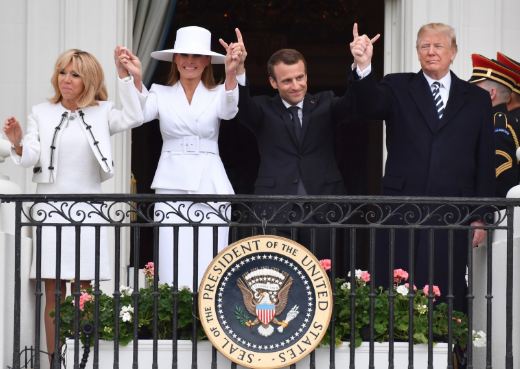 "She [Melania] can’t go outside," says Macron. “She can’t even open a window at the White House."

The French First Lady told the press that the two ladies have loads in common including their sense of humor but their lifestyles are drastically different. Given Frances more laidback policies, Macron is able to go out and about on the town whenever she likes. But, Melania is confined to the White House most days because of her security detail. “She [Melania] cannot do anything.”

It's certainly not easy to secure the First Family. Because of the nation's mix feelings about Trump, his entire family, including his grandchildren, continually have security controlling their every move. Macron credits the high-security as the reason for Melania's sometimes "grim" look in public. Wouldn't you be a bit bummed if you couldn't go to the bathroom without an escort?

Brigitte definitely sympathizes with the First Lady who is trying her best to adjust. She made it very clear that her friend is “someone who has a strong personality but works hard to hide it. She laughs very easily, at everything, but shows it less than I do.”

Not since Jackie Kennedy, has a First Lady been put under such a microscope. Macron noted that everything Melania does is "interpreted” and “over-interpreted.” Naturally, the media always promotes the negative tales because they tend to sell better. Yet, the press rarely shows photos of Melania smiling with children during her endless visits to hospitals and schools around the world!

It's about time for the media to lay off Melania's occasional somber attitude and instead focus on her efforts to become one of the best First Lady's in history.

Let us know how you feel about Melania Trump. Do you think the country should calm down so this lady can go for a walk outside in peace?