Michelle Obama smiled for the camera's when she greeted Donald and wife Melania at the White House two years ago. But, now, the former First Lady has dropped the act and revealed how she really feels about the new First Family. 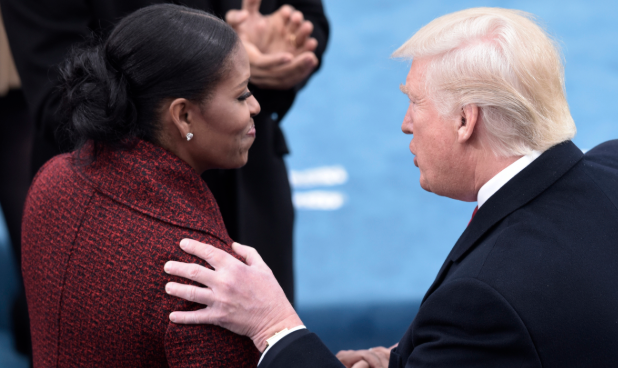 In her new book, Michelle says that she will "never forgive" Trump for adding to the birther conspiracy. She continues to say that his "reckless innuendos" put her family's safety at risk.

"The whole [birther] thing was crazy and mean-spirited, of course, its underlying bigotry and xenophobia hardly . But it was also dangerous, deliberately meant to stir up the wingnuts and kooks," writes Michelle.

"What if someone with an unstable mind loaded a gun and drove to Washington?"

Michelle's distaste for Donald is certainly nothing new. Her speeches during the campaign we're ultimately more popular than both Hillary's and Barracks. Still, the mother of two typically focused her attention on policy and Donald's less-than politically correct lingo. Rarely, did she point out that the current President's birther movement affected her.

Donald, of course, was not the only one to suggest that President Obama was not born in the United States. Plenty of politicians and famous faces questioned his Birth Certificate. It first started in 2008 when Barrack was running for President. Trump didn't push the conspiracy until years later in 2011. And, when the truth finally came out. Trump was one of the first to back off.

Naturally, once the media got ahold of Michelle's writings, they flocked to the President for a quote. Trump countered by saying he also has some unsettled issues with the Obamas.

Do you think that Melania should forgive and forget? Share this article with your Facebook friends and tell the world what you believe!