Melania Trump Reveals Why Donald Is Impossible During The Christmas Season

A source close to the First Lady revealed to HollywoodLife why Donald Trump is pretty impossible to deal with during the Christmas season.

It turns out that the President isn't the easiest person to buy for which is why the First Couple rarely exchanges Christmas gifts.

It's no surprise that Trump is a bit picky with gifts. After-all, what would a billionaire President want for Christmas? An Apple Watch or new shiny red tie probably aren't on the Donald's wishlist. Still, that doesn't mean the Trump White House won't have the spirit of Christmas in the hallways this year. Melania, who's known for her Christmas cheer, is making sure that the world is celebrating with Washington.

RED is the color this Christmas in the White House. Sure, there's some green sprinkled here and there. But, everyone is talking about Melania's red Christmas trees. Some say they're a bit too much, even a little creepy. But, the Trump's never do subtle. And, would we really want them to? The boldness of the Trumps is what we love! 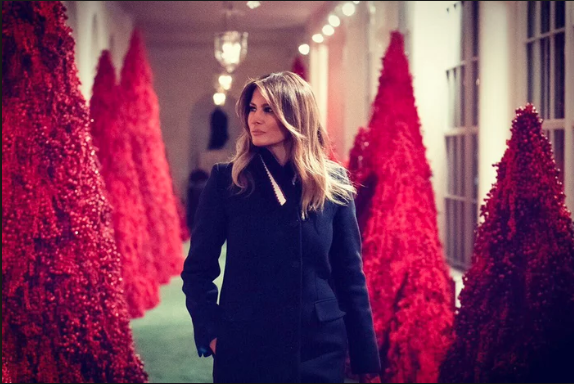 Melania recently spoke at Liberty University where she defended her choice. FLOTUS told the crowd that in real life the trees "look even more beautiful." She even invited the crowd to come see for themselves! "You're all very welcome to visit the White House," said Melania. "I hope everybody will come over and visit it."

The entire Trump clan including the grandchildren are set to celebrate the holiday in Florida at their famous Mar-a-Lago resort. Melania's parents are even making the trip to celebrate with the First Family. Let us know what you think of FLOTUS and her red Christmas trees. Do you think they're festive, or a Christmas disaster?